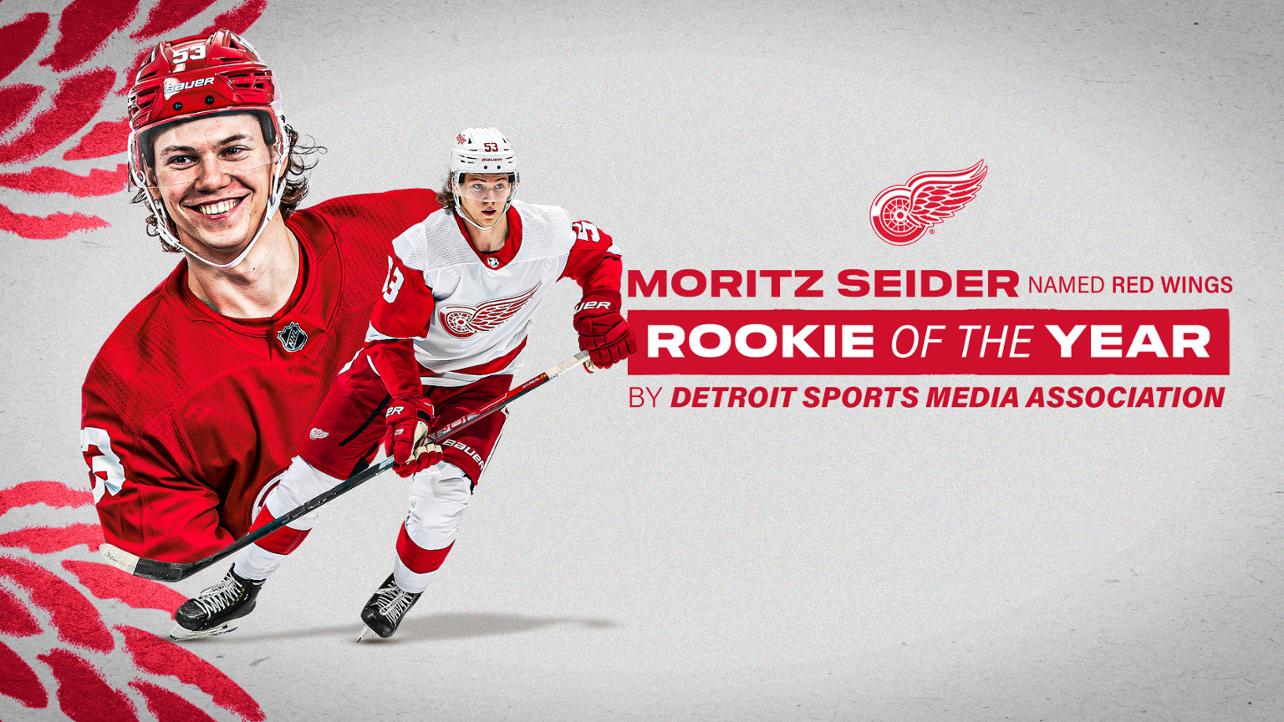 DETROIT - Detroit Red Wings defenseman Moritz Seider has been named the 2021-22 Red Wings Rookie of the Year by the Detroit Sports Media Association.

Seider, 21, skated in all 82 games with the Red Wings in 2021-22, notching 50 points (7-43-50) and 34 penalty minutes. The 6-foot-4, 197-pound blueliner paced all Red Wings rookies in scoring while leading the team with 43 assists, 21 power play points and 23:02 average time on ice. In all, Seider ranked among the NHL's top rookie defensemen with seven goals (2nd), 43 assists (1st), 50 points (1st), 34 penalty minutes (7th), two power play goals (T1st), 21 power play points (1st), two overtime goals (1st), four game-winning goals (1st), 187 shots (1st) and 23:02 average time on ice (1st). His 50 points are the third-highest total in franchise history by a Detroit rookie defenseman and the most since Nicklas Lidstrom (60) in 1991-92. Additionally, Seider set a franchise record by becoming the first rookie defenseman to author an eight-game point streak (Feb. 9-March 4). Seider was named a finalist for the Calder Memorial Trophy and is looking to become the sixth player - and first defenseman - in franchise history to be named the NHL's Rookie of the Year.

Originally selected in the first round (sixth overall) by the Red Wings at the 2019 NHL Entry Draft, Seider recorded a pair of assists in his NHL debut on Oct. 14 vs. Tampa Bay, becoming the first Detroit skater with multiple assists in his NHL debut since Vyacheslav Kozlov did so on March 12, 1992 at St. Louis. A native of Zell, Germany, Seider was named the NHL's Rookie of the Month for October after notching eight assists through his first nine games, making him the first Detroit rookie with at least eight assists in a calendar month since Pavel Datsyuk posted eight in 13 games in January 2002. Seider later became the second player in Red Wings history to score his first career NHL goal in overtime when he accomplished the feat on Nov. 6 at Buffalo, joining Mud Bruneteau (Dec. 14, 1935 at Toronto).

Seider will be honored by the DSMA prior to a Red Wings home game during the 2022-23 season. The DSMA Red Wings Rookie of the Year Award dates back to the 1948-49 NHL season. Previous recipients of the award include current Red Wings Dylan Larkin and Filip Hronek along with Calder Memorial Trophy winners Roger Crozier, Glenn Hall and Terry Sawchuk.