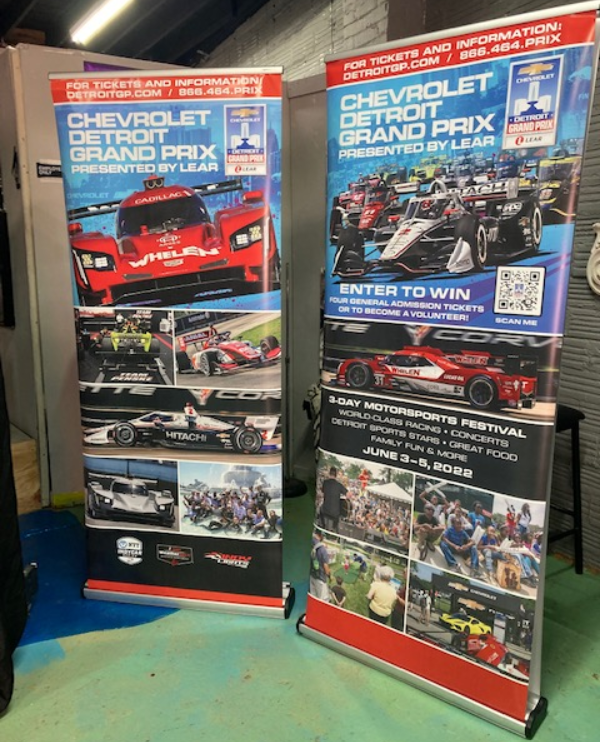 DETROIT, Mich. (May 4, 2022) – For the 22nd and final Grand Prix weekend on Belle Isle before its return to Downtown Detroit next year, the Chevrolet Detroit Grand Prix presented by Lear will recognize the history and heritage of the event’s unique island home leading up to and during the June 3-5 race weekend.

On Wednesday, Grand Prix officials shared plans for several ways that fans and followers can celebrate the tradition and memorable moments of the races at Belle Isle Park – the venue that has served as the home of the Detroit Grand Prix since 1992. The initiatives unveiled Wednesday include a new public art installation across Detroit communities, powered by longtime racing partner PPG.

With special memories and dramatic motorsports moments at the Raceway at Belle Isle Park street circuit, the Grand Prix will honor the tradition of the event’s history on the island and provide a preview for the future of the event in a special “Legacy” display area during the upcoming Chevrolet Detroit Grand Prix presented by Lear. Located on the pathway from the Chevrolet pedestrian bridge over the race track to the paddock where the competitors prepare their cars all weekend, the Grand Prix Legacy display will highlight the signature moments in the history of the event on Belle Isle. Through classic photography and historical video highlights, visitors to the Legacy display will take a tour through four decades of world-class racing on Belle Isle. The display will also pay tribute to the partnerships that have helped the Grand Prix make a positive impact on the island, including the more than $13.5 million in improvements and infrastructure enhancements at Belle Isle Park. The collection of Official Grand Prix posters since 1992 will be on display as well to reflect on the event’s unique island heritage. Fans will be able to relive some of the most memorable moments from the Grand Prix on Belle Isle through a complimentary digital photo service featuring green screen technology that will allow visitors to turn back the clock and be part of the historic action while sharing the creative images on social media. Showcasing the vision for the future of the Grand Prix, the Legacy display will also highlight the return to its original home on the Streets of the Downtown Detroit in 2023. Providing a glimpse at the future of the event and the buzz and excitement created by racing on the streets of the Motor City and along the Detroit Riverfront, the display will look ahead to the next chapter of the Grand Prix’s legacy.

“We are proud of all the great memories the Grand Prix has created on Belle Isle and the positive impact the event continues to make on the island,” said Michael Montri, President of the Chevrolet Detroit Grand Prix presented by Lear. “We are excited to share the celebration of the Grand Prix’s history on Belle Isle with our fans and also look ahead to the next era of the Grand Prix in 2023 and into the future, to build on its legacy in Detroit.”

In the weeks leading into race weekend, fans will be able to share their special memories online. The event’s official website, DetroitGP.com, has added a special section to encourage fans to post their favorite moments from Detroit Grand Prix history on Belle Isle. Whether it’s recalling an amazing move on track, an opportunity to meet one of their racing heroes or simply a great afternoon spent with the family watching the action on Belle Isle, fans can share their memories, and include photos of their top moments, on social media using the hashtag #belleislememories. The evolving collection of memories will be featured now and throughout race weekend at www.DetroitGP.com/belleislememories.

As the event honors its past while embracing its future, the Grand Prix is also proud to continue its outreach into the neighborhoods and communities with a unique new public art and culture program, powered by PPG – one of the longest tenured partners supporting INDYCAR racing for more than 40 years.

The program will feature 10 48-inch high scale model cars designed to replicate the current NTT INDYCAR SERIES cars mounted for permanent display in local neighborhoods. Nine of the cars will be placed strategically in the seven districts throughout the City of Detroit. The Grand Prix will work with city officials to have Detroit-area students and local artists decorate each of the model INDYCARs, utilizing PPG paints and coatings to showcase the creativity and vibrant designs of the artistic talent within our local communities.

The 10th model INDYCAR will be featured in the Legacy display at the 2022 Chevrolet Detroit Grand Prix presented by Lear with local artists, including Detroit’s own Phil Simpson, putting their design touches on the prototype throughout race weekend to celebrate the final year of the event on Belle Isle.

Tickets for the 2022 Chevrolet Detroit Grand Prix presented by Lear can be purchased online at www.DetroitGP.com/Tickets or through the ticket hotline at 866-464-PRIX (7749). For more information on this summer’s Grand Prix, visit www.DetroitGP.com.

ABOUT THE DETROIT GRAND PRIX

The Detroit Grand Prix is a 501(c)3 organization and a subsidiary of the Downtown Detroit Partnership. Scheduled for June 3-5, 2022 at Belle Isle Park, the event will include the Chevrolet INDYCAR Grand Prix featuring the cars of the NTT INDYCAR SERIES, the Chevrolet Sports Car Classic with the exotic sports cars of the IMSA WeatherTech SportsCar Championship, the rising stars of racing competing in the Indy Lights Presented by Cooper Tires and the historic sports cars of Masters Endurance Legends USA. For more information, visit www.DetroitGP.com and follow our social media pages at www.facebook.com/detroitgp, www.twitter.com/detroitgp and www.instagram.com/detroitgp.