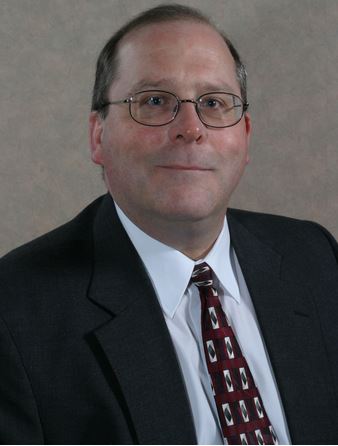 EAST LANSING, Mich. – Jan. 5 – After 33 years serving the Michigan High School Athletic Association in a variety of roles including as its first communications director and most recently director of broadcast properties, John Johnson has retired. His final day was Dec. 18.

Johnson joined the MHSAA staff in 1987 after previous stops working in sports information at Albion College, Western Michigan University and Indiana University. In addition to serving as communications director for the majority of his three-plus decades at the MHSAA, Johnson also at different times during his tenure directed efforts in information technology, marketing and merchandising before spending his final years focused on the Association’s growing broadcast presence.

The communications director position was created by now-retired executive director John E. “Jack” Roberts after Roberts was hired to lead the MHSAA in 1986. Johnson became a recognizable voice speaking for the MHSAA in thousands of interviews over the years, and he also pioneered the Association’s broadcast endeavors – building one of the most highly-regarded and highest-producing Student Broadcast Programs in the United States while leading the charge to bring an abundance of playoff events to cable and digital platforms.

Johnson was one of the first communications specialists hired by a state high school sports association, and one of, if not, the first to carry such wide-ranging responsibilities.

“What people don’t necessarily know is John is the pioneer in this field,” MHSAA Executive Director Mark Uyl said. “The way he shaped this job over the last 30 years has been extraordinary – and has become the model for the 49 other states.”

Johnson is responsible for a number of phrases that are synonymous with the MHSAA – perhaps most memorably, “Promoting the Value – and Values – of High School Sports.” He also designed all of the print and broadcast materials for a sportsmanship initiative during the late 1980s and early 1990s that was the first of its kind nationally and made the MHSAA a leader on the topic. More recently, he championed the “Safer Than Ever” campaign that aspired to explain that high school football is safer now than it’s ever been because of changes to game rules, practice rules and other modifications. Johnson also has been a source of historical context for many media and schools over the years, and he served multiple terms on the National Federation of State High School Associations (NFHS) national record book committee.

His final years were as “all things broadcasting” as Johnson served as the MHSAA’s first director of broadcast properties – an all-encompassing title that included all-encompassing responsibilities including efforts many years in the building. The MHSAA provides video broadcasts of nearly all of its MHSAA Finals – including football and basketball with FOX Sports Detroit – and Johnson has navigated the growth of those opportunities and also with the MHSAA Network’s audio offerings during championship events. He guided the MHSAA’s School Broadcast Program from its creation during the 2008-09 school year and provided valuable knowledge as the MHSAA took a leading role in the creation of the NFHS Network digital platform for live and on-demand school sports broadcasts. Michigan SBP schools are among the top content providers to the Network, regularly broadcasting upwards of 500 events per week.

Johnson’s voice has continued to be heard weekly on more than 100 radio stations statewide as part of the “This Week in High School Sports” show often plugged into halftimes of broadcasts and other regular programming.

“Being the voice, and having to be the face a lot, is something that came with the territory – somebody had to be the storyteller. And while you can be prideful about that, the important thing is still the story,” Johnson said. “I’ve said it a lot: I was the lucky guy who got the job. Because the story was there to be told, the work was there to be done.”

Johnson attended Mount Pleasant Sacred Heart and then Michigan State University, where he earned a bachelor’s degree in journalism. He began his career as a fulltime assistant in Albion College’s college relations office in 1978 while still a student at MSU, graduating from the latter in 1979. He also worked briefly in the news department with WITL Radio in Lansing and as an intern in the Office of Public Affairs at Ferris State University before moving on to WMU, and he came to the MHSAA after working in a promotions capacity for Michigan Farm Bureau.

The MHSAA is a private, not-for-profit corporation of voluntary membership by more than 1,500 public and private senior high schools and junior high/middle schools which exists to develop common rules for athletic eligibility and competition. No government funds or tax dollars support the MHSAA, which was the first such association nationally to not accept membership dues or tournament entry fees from schools. Member schools which enforce these rules are permitted to participate in MHSAA tournaments, which attract more than 1.4 million spectators each year.