The Detroit Sports Media Association is proud to present annually the prestigious Ty Tyson “Excellence in Sports Broadcasting Award” to one Active Member of our organization for outstanding achievement in sports coverage. Our 2020 Ty Tyson Excellence in Sports Broadcasting Award will be presented at our 34th Annual DSMA Charity Golf  Scramble and Scholarship event Monday, July 13th at at Cherry Creek Golf Club in Shelby Township. 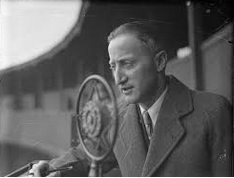 Winners are selected by the DSMA Board of Directors from a list of potential candidates provided by member nominations. These nominees include but are not limited to a member of the Metro Detroit media who exemplifies excellence in sports reporting and coverage as demonstrated by Ty Tyson, the founder and the first president of the DSMA whose name the honor bares. Think about those Active members who in their broadcast work in the past year were exemplary. This includes work as sports anchors, update reporters, play-by-play, game analysts, game reporters, sports talk show hosts, and sports special program hosts. The DSM also considers those sports broadcasters who performed these skills well over a period of time. Your nominee should be among those Active Members who fulfill those criteria. Previous winners of the award are eligible.